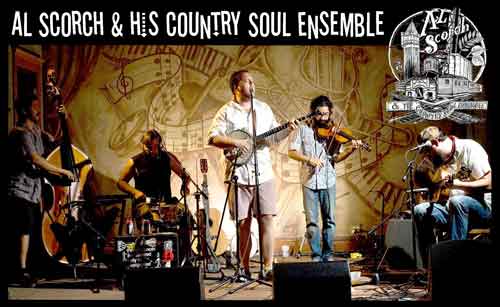 In his new full-length CD release, Tired Ghostly Town, Scorch delivers jubilant anthems and poignant reflections in 10 songs populated with a cast of vibrant characters. The protagonist wishing for a pair of gold cuff links to accompany his beau to her daddy’s funeral; the deserting Civil War soldier headed across destroyed cotton fields beckoning to “Miss Rosie”; or a hearse driver bound for the cemetery accompanied by a sonorous clarinet. Scorch doesn’t just introduce these denizens, he inhabits them.

“It’s all composites – myself and people I see on the street,” he professes. “As I watch people walk by, I can stare at each of them and come up with a story of who they are, where they’re going, why their jacket is that color, why the stain is on the front of it, why they’re holding that stack of papers in front of the retirement home. I think my characters come from creating this feeling I want to get across when I write songs.”

Both solo and with a close family of musicians, Al Scorch is very much a live performer at clubs, festivals, and other venues, He embraces the independence of house concerts –a loose circuit that extends from New Orleans to Portland; Missoula to San Francisco and all points in between. “Flyers go up, phone calls get made, a Facebook page appears and everyone brings their own beer. But beyond that, it’s not promoted in newspapers because to have music in your house and pass the hat is illegal! I’ve been touring this scene for eight years and it is expanding with more and more houses and spaces: store fronts, radical bookstores and lofts.”

Self-described as a “fourth generation Chicagoan, born and bred,” Al recalls that his Missouri-born mother played banjo and had one in the house, while his dad played piano and guitar. “My dad showed me a few things on guitar,” says Al. “When I heard Dolly Parton and Pete Seeger’s records, I thought the banjo was pretty cool.” The sounds of his hometown began with the Irish and Eastern European music transported to the new world. “The WLS Barn Dance was a radio show that predated the Opry,” he notes. “Chicago has music from Appalachian immigrants and jazz musicians from New Orleans and Memphis. A legacy exists, so if you want to take lessons from a 68 year old jazz drummer who played with Ella Fitzgerald you can.”

Creating songs for Tired Ghostly Town, Al woodshedded in a Georgia farmhouse, jogging in the morning, drinking copious cups of coffee and working for up to eight hours a day. “Songs and ideas float in the air past your mental eye until you’re struck with a feeling that is summed up in one phrase,” he says of his writing process. “It’s been said before, but sometimes a song can write itself in 20 minutes.”

As a student of musical history, Al Scorch appreciates tradition, but he is not bound by it. “Sitting in on an old time session, the musicianship is incredible, but it’s almost like there’s no mystery to it. I don’t want to know, that’s what gives me chills and makes the eyes well up –It sounds like an Irish ghost on a gypsy pirate ship drinking beer with a cowboy – what the hell is it? Where is it coming from?”
If you would like more information or a CD for any of the artists on our Band Roster then please drop us an email Owlsworld@gmail.com

Posted by Purveyors of fine quality entertainment at 17:25

For more info please contact us here or Owlsworld@gmail.com